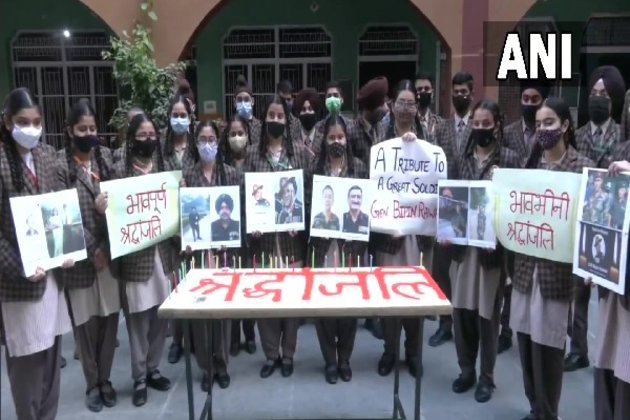 Jammu (Jammu and Kashmir) [India], December 9 (ANI): School students of Jammu on Thursday paid their tribute to Chief of Defence Staff General Bipin Rawat and mourned his loss as he lost his life along with 12 others in a chopper crash in Tamil Nadu on Wednesday.

Speaking to ANI, an employee at School said that General Rawat presented himself as a model to the entire world and he created his different identity in the world.

"The contribution that he did for the country, is his identity, but as a soldier and a human being, he was a nobleman. He presented himself as a model to the entire world. We will not forget this. He created his identity in the peacekeeping force as well," he said.

"He led India extremely well in the Surgical strikes. He stood like a wall in front of the anti-Indian forces. It is a tragic loss that is hard to bear. The whole country is mourning his loss. We pray for the soldier who survived the crash," he added.

Another employee, Paras hoped that this tragedy will bring the nation together.

"The nation suffered a major loss. We are all shocked. We lost a major visionary. Someone who integrated our defence forces in an unprecedented way. It would take a long time for the nation to build up from this. I am sure this tragedy will bring us all together," he said.

School student, Bhumi Thakur mourned his loss and said that it is tragic news not only for the defence forces but also for the entire nation.

"It felt very bad to hear such news of General Bipin Rawat and his wife passing away along with 11 officers. It all happened so suddenly. He had contributed a lot in the Surgical Strikes that took place in 2016. It is tragic news not only for the defence forces but also for the entire nation," she said.

Earlier today, the mortal remains of those killed in the military chopper crash on Wednesday were brought to Madras Regimental Centre from Military Hospital, Wellington in Nilgiris district of Tamil Nadu.

The accident claimed the lives of 13 people including Chief of Defence Staff (CDS) General Bipin Rawat and his wife Madhulika Rawat.

General Rawat was travelling from Sulur to Wellington when his helicopter crashed near Coonoor.General Rawat, India's first CDS, was on a visit to the Defence Services Staff College in Wellington to address the faculty and student officers of the Staff Course when his chopper crashed.

The Indian Air Force has ordered an inquiry into the accident.

General Rawat was appointed as India's first Chief of Defense Staff on December 31, 2019. He previously served as Chief of the Army Staff from January 2017 to December 2019. He was commissioned into the Indian Army in December 1978. (ANI)