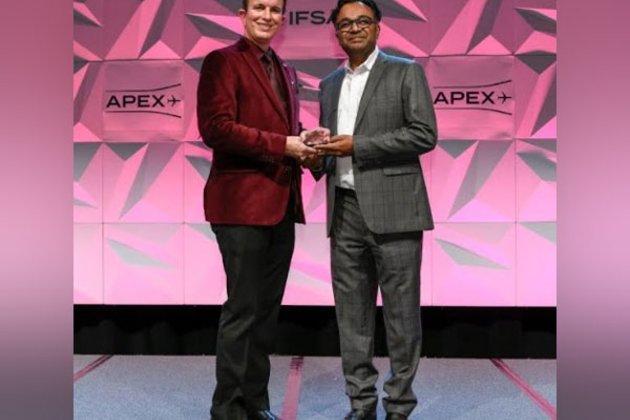 The award was conferred at the APEX EXPO held in Longbeach, California.

APEX is the largest non-profit airline association in the world dedicated entirely to the passenger experience. The global airline association recognized SpiceJet for its Cabin Crew app developed in-house by SpiceTech, the technology subsidiary of SpiceJet, last year during the COVID-19 pandemic, which has helped digitize the operational processes of the cabin crew.

The app hosts a range of digital documents, manuals, current cabin defects and various operational forms that the crew can easily access, both online and offline.

The crew can use the app to submit Crew Baggage Declaration and Cabin Check forms that auto-capture the date and time of completion and, if being used in offline mode, are saved to the user's device before being uploaded to the Company's database once there is an internet connection. Both of these forms eliminate the traditional need to use hard copies.

Ashish Vikram, Chief TechnologyInnovation Officer, SpiceJet said, "Innovation and technology is at the heart of everything we do to set new benchmarks in the airline industry. Our technology arm, SpiceTech, was formed with the sole purpose to achieve excellence in our operations by simplifying the internal processes and introducing our passengers to newer and finer experiences. I feel extremely glad to receive this award that showcases the 'new' face of SpiceJet amid Covid that is committed to not just create superlative experiences for passengers but enhances operational capabilities of our workforce too. Going paperless across operations will also support SpiceJet's sustainability mission as a responsible airline."The award was received by Eash Sundaram, an Independent Director on the board of SpiceXpress.

SpiceTech has also developed an e-form within the app that the crew can use to pre-store their dose-specific COVID vaccination appointment date and upload vaccination certificates. This database of information, which can be viewed or downloaded via a web application, assists SpiceJet in pre-assigning cabin crews' flight duties.

Additionally, rather than having to verify all previous current cabin defect entries via a physical cabin defect log book and aircraft tech log book and update them with any new entries, the crew can use the app to see a digital preview of defects.

This minimizes the duplication of cabin defect entries in the hard copy of the cabin defect log book, as the app is in sync with SpiceJet's aircraft maintenance software and is refreshed in real-time. Previously, cabin crew could only view the defects in the log book on boarding the aircraft, but using the app allows crew to do so ahead of time.

Some of the other innovations by SpiceTech include SpiceScreen, a first-of-its-kind, light-in-weight, wireless entertainment system that enables seamless delivery of content onto the personal devices of the passengers through Wi-Fi network, cab bookings at 35,000 ft. SpiceJet's 24x7 automated customer service agent, Ms. Pepper's WhatsApp based check-in is another such offering through which SpiceJet enhances customer experience.

In November 2021, SpiceJet became the first airline in India and the second budget airline in the world to be awarded the highest rating for flight health and safety - the Diamond status by The APEX Health Safety powered by SimpliFlying for ensuring highest standards of cleanliness and sanitization amid the pandemic.

SpiceJet is India's favourite airline that has made flying affordable for more Indians than ever before. The airline operates a fleet of Boeing 737s, Bombardier Q-400sfreighters and is the country's largest regional player operating 63 daily flights under UDAN or the Regional Connectivity Scheme. The majority of the airline's fleet offers SpiceMax, the most spacious economy class seating in India.

This story is provided by NewsVoir. ANI will not be responsible in any way for the content of this article. (ANI/NewsVoir)