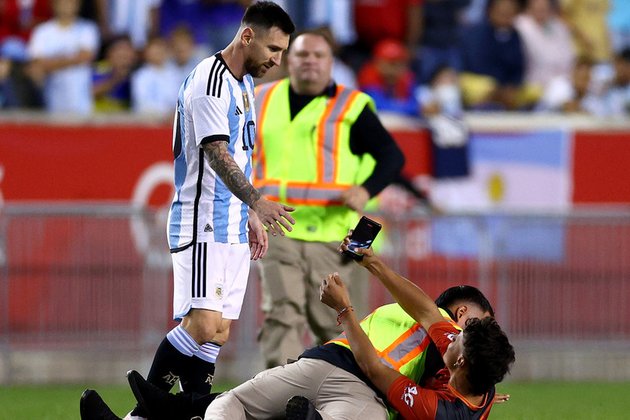 Lionel Messi's status as one of the world's most famous footballers can often come with a few challenges - not least of which is the never-ending pursuit from autograph hunters, and the Argentine superstar learned on Tuesday that he isn't even safe from his legions of fans on a football pitch.

Messi and Argentina continued their preparations for November's World Cup in Qatar with a 3-0 friendly win against Jamaica in the Red Bull Arena in New Jersey late on Tuesday, in a game in which the Paris Saint-Germain ace scored twice to increase his international tally to 90 goals in 164 appearances.

However, the fixture was perhaps more notable for the pitch invasion of one of Messi's adoring fans, who stormed onto the turf in the moments after he scored a goal towards the end of the game - and demanded that Messi sign his back.

The multiple-time Ballon d'Or winner initially flinched in surprise when confronted by the shirtless supporter, but then appeared to agree to the demand - only for the pitch invader to be quickly swallowed up by a phalanx of security.

Messi himself even appeared to be momentarily entangled in the melee and stumbled away as throngs of men in high-vis jackets surveyed the scene, and presumably quickly removed the offending fan from the stadium.

Incredibly, it was one of three pitch invasions to take place during the friendly game - with two others attempting to pose for a photograph with Messi before they too were tackled by pitch-side security.

Messi, who was a second half substitute, scored his brace in just three minutes late into the second half after Manchester City youngster Julian Alvarez had given him team an early lead in the first half.

Speaking afterwards, Alvarez indicated that Messi remains at the top of his game, even at 35 years of age.

"There are no words to describe what he is," he said. "Playing five, 10 minutes or all the match, he manages to do amazing things."

This was an appraisal to which national team manager Lionel Scaloni agreed: "You have to enjoy Messi. No matter your country, everyone does. I'm his coach, but I would buy a ticket to see him."

The result was Argentina's 35th consecutive win; a record which dates back to 2019 and makes them one of the favorites to lift the World Cup in Qatar later this year.