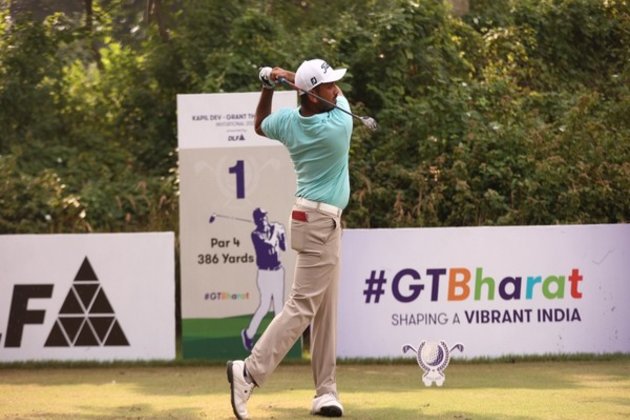 Gurugram (Haryana) [India], September 29 (ANI): Ahmedabad's Varun Parikh shot the day's best score of five-under 67 to join Gurugram's Kartik Sharma in the lead after round three of the Kapil Dev - Grant Thornton Invitational 2022. Kartik shot an even-par 72 on Thursday to be tied at the top with Varun at six-under 210 here at the DLF GolfCountry Club.

Varun Parikh (73-70-67), the winner of the PGTI Qualifying School this year, jumped up seven spots from his overnight tied eighth position as a result of his 67 that featured six birdies and a bogey. After a slow start with a bogey on the second, the 24-year-old Parikh picked up the pace with some terrific wedge shots that led to birdies on the fourth and ninth.

Varun carried forward the momentum on the back-nine rolling in some long putts on his way to birdies on the 11th, 12th, 14th and 15th.

Parikh said, "I hit it solid and kept it in play. I hit a lot of fairways and greens and just followed my gameplan. I was a little calmer today as I knew that with a four or five-under you're always in contention at this course. I'm just going to stick to the same gameplan in the last round."Kartik Sharma (71-67-72), the halfway leader by two shots, slipped into the joint lead after a topsy-turvy 72 on Thursday. The 22-year-old Kartik, playing at his home course, had a superb front-nine as he sank an eagle and three birdies. He holed an eagle from the fairway with his third shot on the eighth.

Sharma had a contrasting back-nine where he had some off swings that resulted in five bogeys.

Kartik said, "The more you play this course, the more you learn. I feel I have a little more advantage with this being my home course. I know the right areas to hit. But one has still got to execute those shots. It was an up and down day but I'm pleased with the way I handled myself."Among the prominent names, Gaganjeet Bhullar and Yuvraj Singh Sandhu were tied 26th at five-over 221, while Jyoti Randhawa was tied 36th at seven-over 223.

In rounds three and four, amateurs are playing alongside the professionals in a unique format. Amateur golfers have teamed up with the professionals and they are competing for separate team prizes. There will be a different set of amateurs and teams competing in rounds three and four. The amateurs will also include personalities from the corporate world as well as celebrities. (ANI)