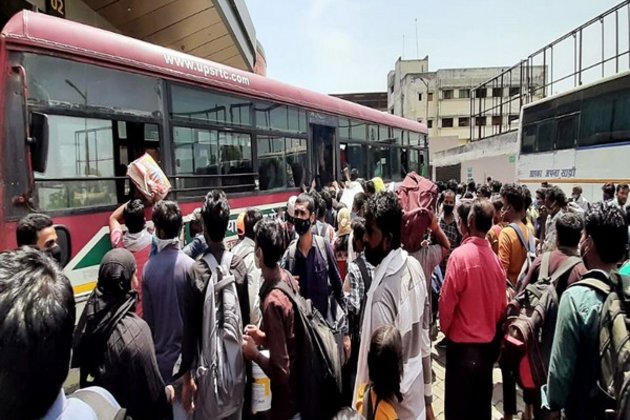 Lucknow (Uttar Pradesh) [India], September 29 (ANI): Elevating the standards of public transport, the state of Uttar Pradesh, is soon going to have at least one state-of-the-art bus stand in each district.

To fulfil the objective, in the first phase, 24 bus stands in 16 districts will be developed under the PPP model with facilities for passengers' convenience equivalent to international standards.

The demand for bus services is high, given their easy availability and comparatively cheaper fares, which is why well-equipped bus stations are the need of the hour.

The Yogi Adityanath government in its second term is taking forward its work of establishing state-of-the-art bus stands that will offer improved and better facilities to bus passengers.

The top priority will be the provision of clean drinking water for passengers. Bus stations will be repainted, timetables and fare tables will also be put up. Along with making proper lighting arrangements, air conditioners will also be installed at the bus stands. Besides, toilets will be cleaned regularly to ensure hygiene and cleanliness. In addition, facilities like proper waiting rooms will also be provided. Tenders for this will be floated in the month of October.

Sanjay Kumar, MD, State Road Transport Corporation, informed that a complete action plan has been formulated under the PPP model to equip the bus stands with better facilities. In October, tenders will be issued for the identification and development of 24 bus stands in 16 districts in the first phase. In the second phase, 35 bus stands will be selected.

"In pursuance of CM Yogi's directives of providing airport-like facilities to passengers, work is being carried out in a phased manner," he said.

The Transport Department will provide the land for bus stands and then a private party will operate the modern bus terminus. The Transport Department has fixed a period of 35 years for the maintenance which might get extended further as per the need. About 70 per cent area of the bus stand will remain for the buses to operate while 30 per cent of the space will be utilised for the construction of the building.

According to Sanjay Kumar, the entire focus of the government is on improving the quality of services for the passengers as buses are one of the most commonly used means of transport when it comes to both interstate and intrastate travel. (ANI)